Catalonia Independence: why do Catalans want to separate from Spain?

To answer the question “Why does Catalonia want independence?” one may be tempted to look to the emergence of extremists in recent years. But the movement is much larger than that and in fact many argue that central government has created more separatists than the independence movement itself, whether through years of inaction, hoping the issue would go away, or other factors – one could simply look at the size of the wealth distribution (one of the highest in the world) and erosion of autonomy since 2010.

Yet the answer lies much deeper in the history of the Iberian Peninsula. Even beyond the first dictatorship of the twentieth century, under which famous architect Antoni Gaudí was arrested on trying to enter a church for refusing to speak Spanish. Long before Spain even existed as a united kingdom, in fact.

In this article, based on a section from the book Outstanding Catalan Contributions, we look at what makes Catalonia different from the rest of Spain and why that is significant. With this we hope to inform you, the reader and allow you to draw your own conclusions as to to why much of Catalonia seeks independence.

Catalonia: a society with a remarkable capacity for integration

Catalonia is a country of transit, open to the Mediterranean sea. The Eastern Pyrenees have never acted as a division. The Perthus Pass, on the border between the France and Spain, is less than three hundred metres above sea level.

As a result, over time the country has received all kinds of cultures, a significant impact being left by Greek and Roman cultures superimposed on that of the Iberians, who occupied the east of the Peninsula and further north, reaching the mouth of the Rhone. Later, it was a border land between Christian and Muslim cultures. Early in its history as a distinct country the Frankish reconquest of the formerly Arab-occupied lands in southern Gaul and north-eastern Hispania saw it fully incorporated into the Carolingian Empire, unlike the other Hispanic territories.

So what differentiates Catalonia from the neighbouring peoples is the Iberian substrate, contact with the Greek culture, intense Romanisation, the Frankish reconquest, forming part the Carolingian Empire and feudalism. These characteristics are shared with many of the neighbouring lands of Occitania (from which it received a significant wave of migration in the 16th and 17th centuries).

As a result of its geographical location and the mixing of cultures, Catalonia has therefore emerged as an extremely welcoming, integrative and creative society, open to all currents of thought.

One of its most highly-valued assets is the ability to live alongside the streams of immigrants who have fully integrated into Catalonia. In this context, anyone can be considered Catalan if they live and work in Catalonia and agree to be Catalan, the result of which has been the creation of a single people (bearing in mind the fact that at the beginning of the 20th century Catalonia had only two million inhabitants, and in 2011 it had over seven and a half million, mainly as the result of immigration).

Catalonia (which has always received large flows of migrants from Hispanic lands and the rest of the world) is thus a country founded on mixing, based on the concept of jus soli, in contrast with that of jus sanguinis.

Things have been made easier by the Catalan temperament of being quick to reach agreements, which stems from feudalism, the assemblies of peace and truce and the delegation of power of the count-kings to representatives of the people. 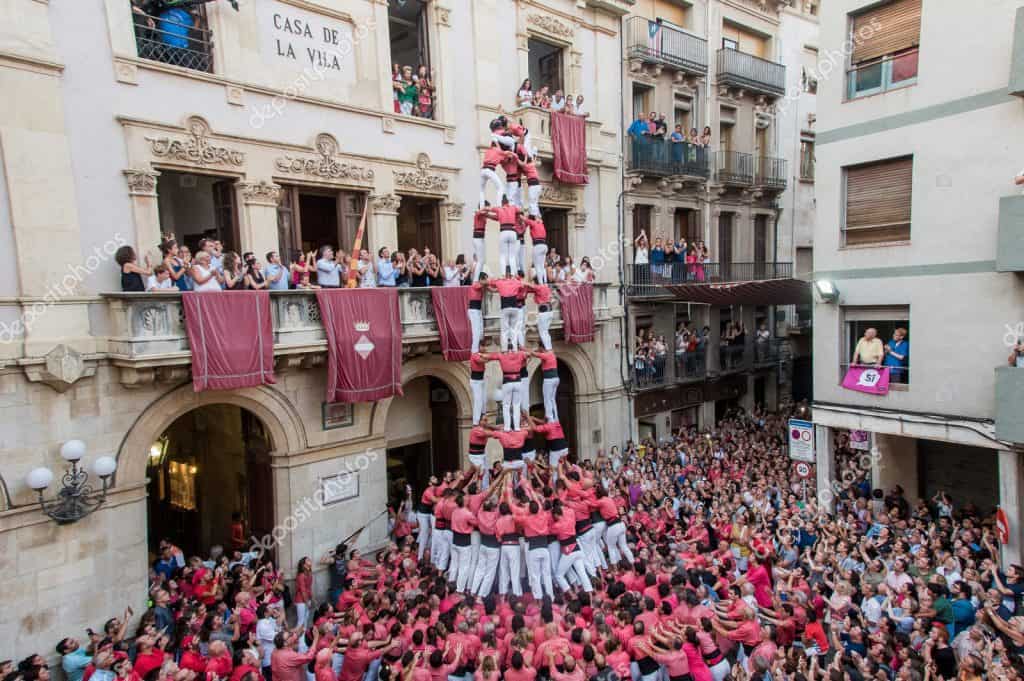 Catalan culture, and especially its language, has acted as the glue for this whole process. It should be noted that Catalonia is a land of societies, clubs and associations of all kinds, from those connect- ed to civic duty via culture in general and popular culture in particular to sport (Barça football club is a paradigmatic case in point) and even the highest level of science. These organisations emerged with no help from the state, firstly because it was not until the early 20th century that Catalonia enjoyed a brief period of embryonic (yet effective) political power, and secondly, because the country has always had to fight against misunderstanding, discrimination and censure from the Spanish government, even after the restoration of democracy.

Two grassroots sources that, for many years, have paved the way for a range of associations, groups and colles are sardanes (traditional popular dance) and castells (literally ‘castles’, human towers). Both cases are a sign of openness and invite participation, and have demonstrated a great capacity for integrating people from outside Catalonia. In the case of castells, another point to highlight is the strong teamwork involved.

Catalan sardanes events are regularly organised in different European cities, and the castells tradition has expanded to other locations, particularly China and Chile. In 2010 UNESCO included the castells within the Representative List of the Intangible Cultural Heritage of Humanity. The Patum festival, held in Berga, also forms part of the UNESCO Intangible Cultural Heritage of Humanity. Another successful grassroots source is the geganters, people who make or carry figures of giants (cused in parades), associations of which are scattered around Catalonia.

The capacity for creation and recovery in the face of the most difficult circumstances has demonstrated that the Catalans are a people who are permeable but also have a high level of resistance. It is a dynamic society, open to diverging and contrasting ideas and interests, where a peaceful, understanding and democratic way of doing things has always prevailed.

In the midst of a globalised world, Catalonia is an example of a people committed to dialogue, united in active civic-mindedness, a popular culture of great wealth and a high-class scientific culture. This is our inner strength. One could describe Catalonia as a catalyst of entrepreneurship and contribution-based humanism.

Hard work has always been an essential characteristic of its people and this has also acted as a means of social advancement and for incorporating new arrivals.

These qualities are clearly not exclusive to Catalo- nia but it is also clear the country has used them together from the outset. Appropriately, then, they can be summed up in a single Catalan word: seny. It is difficult to translate, but an approximation would be “great mental aptitude which guarantees fair judgement”, appreciation, comportment and so on. The nearest equivalents in English are ‘wisdom’ and ‘sense’, which shares a common Latin root with seny – ‘sensus’.

It should be noted that to a great extent Catalonia has always been a peace-loving people, from the Peace and Truce of God movements of the 11th century initiated by Abbot Oliba, to the outstanding actions of Pau Casals and the Abbot of Montserrat, Aureli Maria Escarré, during the Franco dictatorship, a very difficult time for the nation.

Despite some short periods of rauxa (another word that is difficult to translate, that can mean «“sudden determination” or “capricious think- ing”»), it is these social values that have made Catalonia a leading country in terms of its ca- pacity to integrate new arrivals, comparable, in some ways (despite not having its own state to facilitate the process), with that of the United States of America.

In 2014, a European Commission study on im- migrants conducted in six cities within the Euro- pean Union (Dublin, Lille, Hamburg, Prague, Tu- rin and Barcelona) discovered the advantages of Barcelona’s model for integration of immigrants.

In Catalonia, both civil society and the public ad- ministrations have a long tradition allowing them to progress from multiculturalism, which has its limits, to the much more open interculturalism.