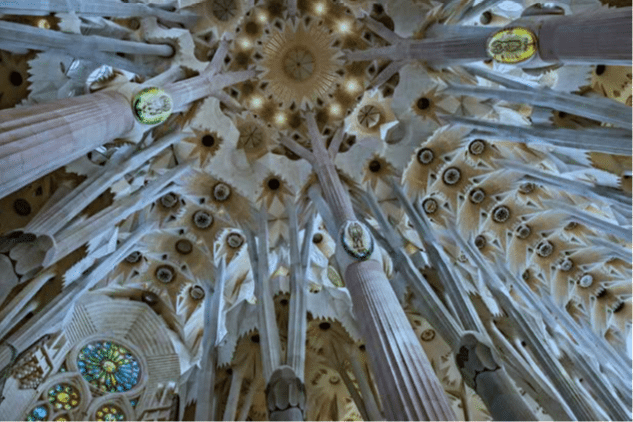 From the industrial revolution to today’s thriving start-up scene, Catalonia has long been a hotbed of innovation, science and new technologies. Nowhere is this more evident than in the field of architecture.

The Catalan Vault, with its origins in the 14th Century, has been used extensively and not only in Catalonia – cities across the USA, for example, are replete with buildings using this technique – as it enables fast and lightweight construction. It was modernist architect Antoni Gaudí who most frequently used this technique, for the roof of the Santa Maria de Cervelló church and the Sagrada Família schools, amongst many others.

Speaking of Gaudí, here is an architect who epitomises the innovative nature of Catalan architecture. He took inspiration from nature and his buildings have virtually no straight lines. In realising his artistic vision, he pushed the boundaries of engineering, using upside-down hanging models (with chains or weighted strings), for instance, to prove his theoretical designs were physically possible. Of his most famous creation, the Basilica of the Sagrada Família, it has been said that “it is probably impossible to find a church building anything like it in the entire history of art” (art critic Rainer Zerbst), illustrating his ability to combine and inspire the worlds of art and architecture in a universal project that has earned it the title Cathedral of Europe.

Preceding and succeeding in this rich architectural tradition are a number of internationally renowned Catalan architects. From the many great Romanesque and Lombard churches, through the Xoriguera family (whence Churrigueresque style) to Lluís Domènech i Montaner, creator of the fabulous Palau de la Música Catalana; and from Ildefons Cerdà, creator of the Eixample district of Barcelona (considered a precursor to modern urban planning due to its rationality and strong social sensitivity), through rationalist Josep Lluís Sert (designer of the Miró Foundation and buildings at various US universities) to Ricard Bofill, responsible for iconic developments such as Les Arcades du Lac, Paris and the Monchyplein district in The Hague, and more recently the T1 terminal at Barcelona Airport and W Barcelona, the dramatic, sail-shaped hotel built on reclaimed land in the Barcelona district.

These, and many more, show a continuous line of prolific architectural masterpieces with both artistic and functional characteristics that have passed the test of time and continue to be enjoyed by both visitors and residents. We will continue to highlight more examples of this exciting and evolving landscape that Catalan architects have created over the last millennium. We will also be developing the Travel section of the site with itineraries so you can explore this fabulous landscape.